Sarasota is synonymous with arts, not sciences, but a growing presence of researchers, clinicians, and entrepreneurs is expanding the regional resume. Founded in 2003, the Roskamp Institute belongs to the medical vanguard. In an unpresuming complex not far from Sarasota-Bradenton International Airport, about a dozen senior scientists are winning six-figure grants from the likes of the Department of Defense, National Institutes of Health, and Veterans Administration to tease out the mechanisms of Alzheimer’s disease, Gulf War illness, and post-traumatic stress disorder (PTSD), among other neurological ailments. A running tally on the institute’s website celebrates the successes of the past 17 years, including more than 450 publications. 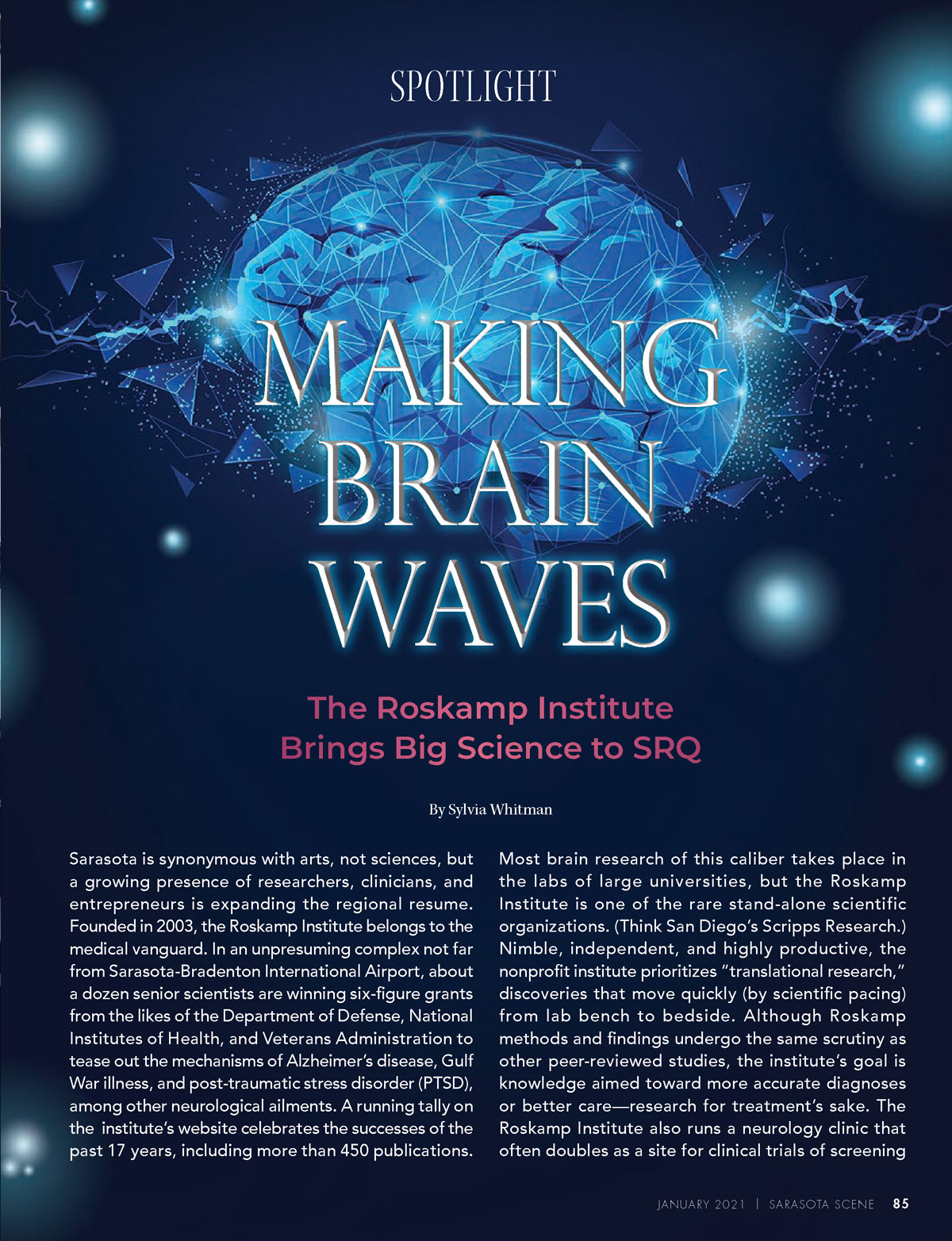 Most brain research of this caliber takes place in the labs of large universities, but the Roskamp Institute is one of the rare stand-alone scientific organizations. (Think San Diego’s Scripps Research.) Nimble, independent, and highly productive, the nonprofit institute prioritizes “translational research,” discoveries that move quickly (by scientific pacing) from lab bench to bedside. Although Roskamp methods and findings undergo the same scrutiny as other peer-reviewed studies, the institute’s goal is knowledge aimed toward more accurate diagnoses or better care—research for treatment’s sake. The Roskamp Institute also runs a neurology clinic that often doubles as a site for clinical trials of screening tools and medications. Says president and CEO Dr. Fiona Crawford, “Everything is about the end game in the clinic.”

How a world-class research facility with about 65 staffers and a handful of PhD students bloomed in a repurposed Bausch & Lomb building on Whitfield Avenue attests to the power of curiosity, personality, philanthropy, and serendipity. In the early 1990s, Dr. Crawford and Dr. Michael Mullan, now the Roskamp Institute’s executive director, discovered the genetic underpinnings of early-onset Alzheimer’s disease as part of a European research team at London University. The breakthrough was a big deal. Published as “A pathogenic mutation for probable Alzheimer’s disease in the APP gene at the N–terminus of β–amyloid,” the study drew attention to the accumulation of amyloid proteins in the brains of people with Alzheimer’s. That suggested that if researchers could develop an amyloid-busting drug, they might open avenues for effective treatment for a progressive disease without much hope. Alzheimer’s disease afflicts more than 5 million Americans—and, along with other dementias, more than 50 million people worldwide, with a new case diagnosed about every 3 seconds. As academic celebrities, Drs. Crawford and Mullan began looking around for the best place to continue their research.

They came to the University of South Florida, in part because Sarasota philanthropists Robert and Diane Roskamp were funding new labs there. As a developer of senior living facilities, Bob Roskamp had witnessed the toll of dementia on patients and their caregivers, so he and his wife took an interest in Drs. Crawford and Mullan’s ambition to do research that promised impact on patient care. Together, the four envisioned a streamlined, state-of-the-art institute light on academic bureaucracy.

The Roskamp Foundation launched the nonprofit Roskamp Institute. In another departure from university custom, the institute set up a neurology clinic under the same roof for people suffering from memory disorders, multiple sclerosis, headaches, Parkinson’s disease, and previous brain injuries—the gamut of neurological maladies. Run by Dr. Andrew Keegan, the clinic now serves about 6,000 outpatients every year. It offers care informed by the latest research, often including opportunities to participate in clinical trials. And the clinic gives researchers access to subjects often willing to fill out questionnaires or share blood samples.

Like a university neuroscience department, the institute also trains PhD students—but European style. Doctoral candidates enroll at the Open University in the United Kingdom and carry out lab work at Roskamp Institute, accredited through the Florida Department of Education. When a Roskamp scientist needs a graduate student for a long-term project, a recruitment notice goes up. “We get applications from all around the world,” says Dr. Crawford. “It’s a pretty high bar, pretty rigorous screening process with multiple interviews,” many of them online even in pre-coronavirus days. Once accepted, PhD students move to Sarasota, combining distance and on-the-job learning for three or four years as they earn their degree. Occasionally, science-minded undergraduates—from New College, for instance—intern alongside them in the lab.