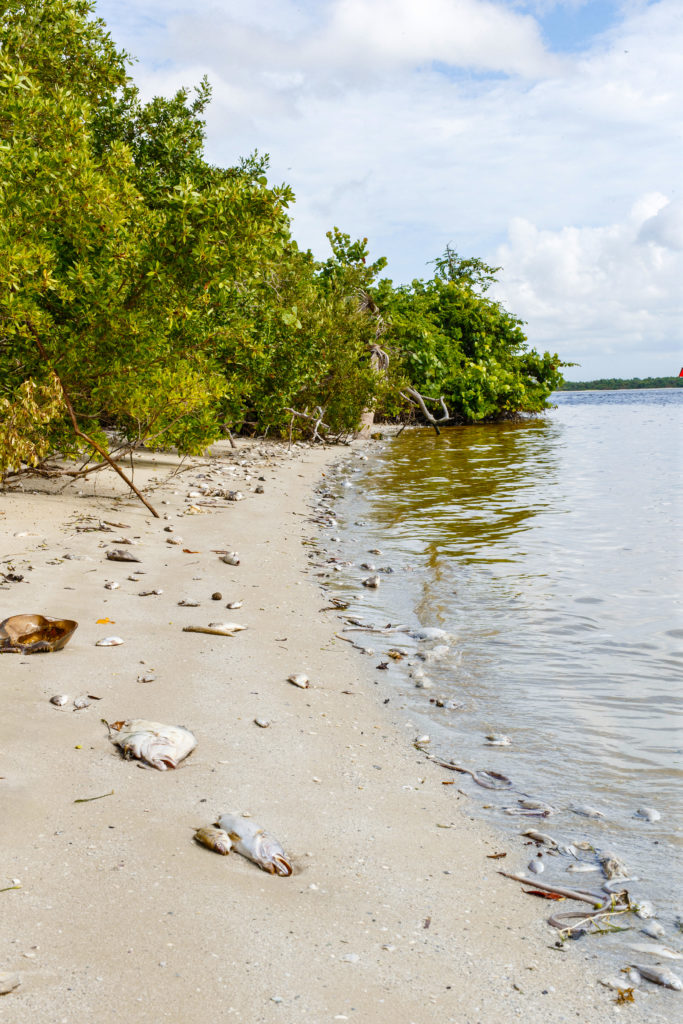 Increased exposure to environmental toxins, chemicals, and viruses that impact the brain is of great interest to scientists at the Roskamp Institute, whose goal is to understand how to protect the brain, including both the young and aging, from the insults that they face during their lifetime.

Residents of Sarasota are very likely to be familiar with Florida red tide, which has intermittently impacted the Florida Gulf Coast for decades. Florida red tide is caused by red tide algae, biological name Karenia brevis,  and this is what blooms and propagates during a red tide event.  The algae release a series of related chemicals called brevetoxins, which are odorless and colorless. You cannot smell or see brevetoxins, but they become aerosolized and pass into the atmosphere near water where they are generated, and we then breathe them in.

Now, the Roskamp Institute is interested in  understanding the long-term consequences of that exposure.  An interesting note about these blooms is that during a previous red tide event there was a documented increase in numbers of residents in Sarasota and Manatee going to emergency rooms for neurological conditions.  This, along with the fact that brevetoxin is a neurotoxin and is well-known for its harmful effects on wildlife, including manatees and dolphins, is what really piqued the Institute’s interest in understanding how it may impact the human brain.

Adult humans have about 86 billion neurons, which transmit their neurological signals down a long structure in their middle called an axon. Individual neurons communicate with each other at the tree-like structures where they touch, called dendrites. To transmit information down those axons, neurons use electrical currents. Brevetoxin is known to interfere with those electrical currents.  As a consequence of that interference, neurological signals to muscles, sensations, and other input from our bodies that goes back into the brain become disrupted. There are also other neurological effects, especially in situations involving acute poisoning in people that have eaten shellfish containing brevetoxin, including neurological complications like seizures.

The scientists at the Roskamp Institute are aware of those acute conditions but are instead focusing on what  the chronic effects of repeated exposure may look like, since residents of Sarasota and Manatee counties are regularly exposed to and affected by brevetoxins in annual blooms. As such, the research team has been monitoring chronic exposure in a group of Sarasota and Manatee residents in their red tide study. One of the ways that they monitor prior exposure is by looking at the antibodies that the body raises against the brevetoxin, which they can readily measure in a blood sample. The Roskamp Institute study team has already started to look at antibody levels in some of their samples and have seen that while a majority of volunteers did not have high levels of these antibodies, a few individuals did show high levels.

What is of interest about our current findings within the study is that when the research team took the blood samples from these study volunteers, they hadn’t been anywhere near brevetoxin for about six months. This implies that there are long-lasting immune effects after exposure to the toxin. The Roskamp team is now investigating whether this or other types of immune response correlate with more or less reporting of neurological signs and symptoms in their cohort, because as of now the relationship between antibody levels and symptom reporting is currently unknown.  Researchers at the Roskamp Institute are hoping the answer to their questions about brevetoxin is that it does not have any effects on the brain in the long term. However, they also know that brevetoxin can get into the brain relatively easily – it is fat-soluble and is therefore able to travel all over the body with ease – and they know it can cause inflammation in a variety of organs. The concern about that aspect of the toxin is that it can also potentially be a trigger that causes inflammation, particularly to the aging brain or maybe even young brains. This is something that Roskamp scientists are also on the lookout for in their study.

In terms of funding for the study, after the horrible bloom through 2018 and 2019, the Roskamp Institute  started a pilot study funded completely by donations.  The Institute raised about $40,000 and recruited volunteers both in the adjacent Roskamp Clinic and in the community. With the data generated from that pilot study Roskamp scientists  were able to submit a grant proposal to the National Institutes of Health (NIH) for a larger study, and that grant application was successful. The Roskamp Institute has been funded for a two year study, during which time individuals will most likely be exposed to another bloom and study team members will be measuring levels of both the antibody and toxin during the blooms, and correlating those levels with reported neurological signs and symptoms of volunteers Nearly 175 residents of Sarasota and Manatee counties are taking part in this study and our goal is to recruit at a total of 400 participants.

The NIH study was funded at about $400,000. This shows there was about a one to ten ratio between donor money and money generated from federal funds. This is a great example of how donor money can enable The Roskamp Institute to launch projects that otherwise could not happen, by supporting the preliminary studies that make our federal grants competitive. We are expecting to extend this NIH study, and bring in additional funding from NIH. The Red Tide project is also representative of the Roskamp Institute’s general attitude towards residents of Sarasota and Manatee; they are trying to look after the brains of everybody here as the community ages, and really understand what it is in the environment, genetics, and so on, that contribute to our increased risk for neurological disorders.

As Roskamp researchers begin to understand whether these environmental exposures are contributing to neurological effects, their logical next step is to find treatments and ways to stop that. Thus, everything here is brought full circle. It starts with folks coming into the clinic or volunteering in the Roskamp Institute’s studies, then bringing it into the labs, developing laboratory tests and models, and from those models the Roskamp Institute develops treatments that we then take back to the clinic, thus completing the circle.

This article was adapted from Dr. Mullan’s red tide study presentation for The Roskamp Institute Grey Matters 2020 webinar, which can be viewed on our website at https://www.roskampinstitute.org/video/grey-matters-2020-webinar-video/

If you want to learn more about this and other clinical research studies being conducted at the Roskamp Institute, please call Megan Parks at (941) 256-8018 ext 3008.