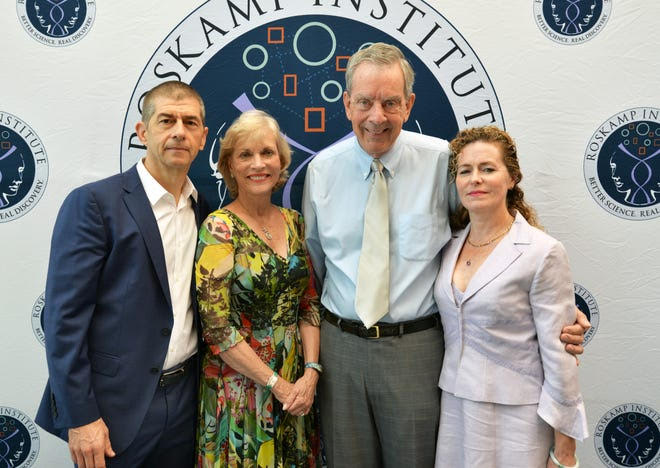 A Sarasota company that researches and treats diseases of the mind is on track to receive, and then make available to local patients, a drug that experts say can be an effective treatment for Alzheimer’s disease.

The drug, called aducanumab and developed by Cambridge, Massachusetts-based pharmaceutical company Biogen, is on track for approval by the U.S. Food and Drug Administration after an expert advisory board gave it a positive review. The Sarasota-based Roskamp Institute is currently in negotiations to receive the drug, meaning it could be available to patients of its Sarasota clinic as soon as early 2021, co-founder Dr. Michael Mullan said.

If it receives approval, aducanumab will be the first disease modifying drug ever brought to market for the treatment of Alzheimer’s. It works by targeting the buildup of a protein called amyloid in the brain, which is thought to cause Alzheimer’s.

Mullan said he and co-founder Dr. Fiona Crawford were among the first to find that amyloid could be a cause of Alzheimer’s. When amyloid first appears in the brain, it can help treat inflammation, but as we age, it progresses to a different phase that is thought to cause Alzheimer’s, Mullan said.

“What we’ve learned over the years, is that amyloid comes in many different forms. Originally we thought it was the big globs you get in the brain that you can see. We thought that was the culprit and if you got rid of that, everything would be fine,” Mullan said. “By the time it gets into globs you can see, it’s probably not actually that dangerous. Prior to that happening, it’s soluble and floats around in the brain. That’s probably the amyloid that does most of the damage. This drug partly picks up that amyloid – that’s why it’s so different.”

The Food and Drug Administration is scheduled to hold a meeting on aducanumab on Friday, where the group is expected to welcome the advisory board’s endorsement. This, according to the Roskamp Institute, is a strong signal that the drug will be approved.