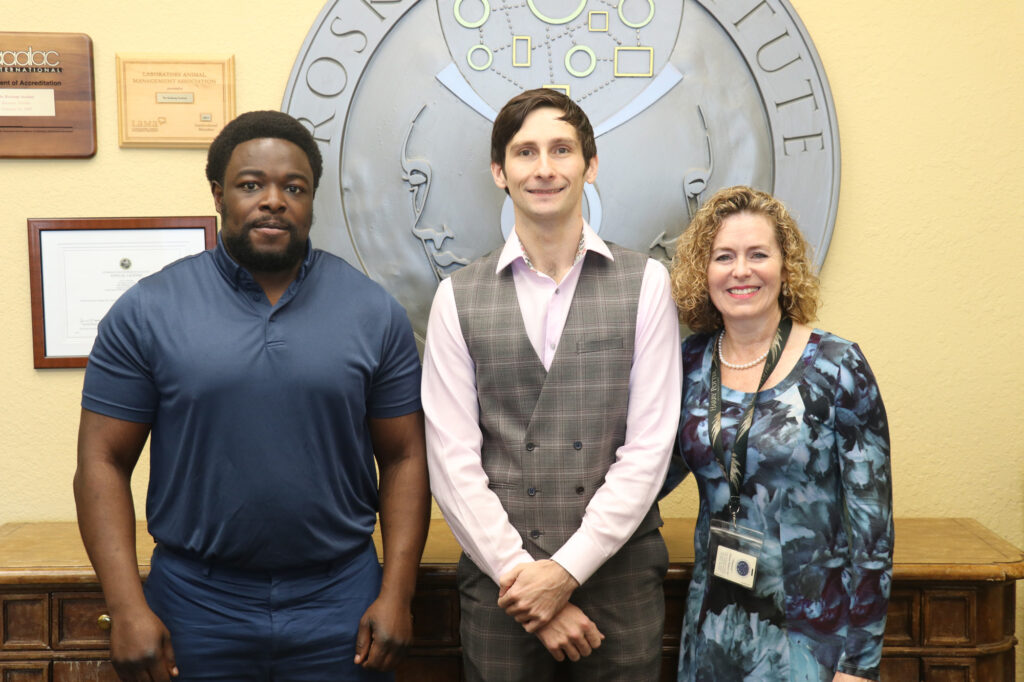 We are pleased to announce that Andrew Pearson has become the 18th graduate of our Neuroscience Ph.D. program. Dr. Pearson is from Manchester, England, having earned his undergraduate degree in Biomedical Sciences from the University of Chester and Master’s degree in Stem Cell Engineering from Keele University in the UK.

Andrew has worked on numerous projects, throughout his graduate studies, since joining the Roskamp Institute in January 2018. Together with supervisors Drs. Joseph Ojo and Fiona Crawford, his research investigated the contributions of the brain’s immune system to the progression of brain pathology and the development of cognitive impairment following Traumatic Brain Injury (TBI).

Andrew’s research has taken him from the lab to the computer, where he has been using artificial intelligence and machine-learning algorithms to uncover the mechanisms driving neurodegeneration and to identify new and more effective drugs that can be put into the clinical research pipeline. “We are incredibly proud of Andrew and his achievements” said Dr. Ojo, “Our work together has resulted in three grants from the National Institute of Health (NIH), and we are delighted that Andrew will be staying with the Institute to continue work on these projects.”

In these new studies, Dr. Pearson will target microglia, the immune sentinel cells of the brain that regulate inflammation following TBI. Using genetically-engineered animal models, Dr. Pearson will investigate how altering the expression of single genes in microglia can influence the inflammatory response to TBI. Additionally, his research will investigate the interaction between inflammation and the dysfunction of the brain’s vascular network and how this is influenced by risk genes associated with Alzheimer’s disease.

“The ability of our scientists to rapidly adopt and integrate new research techniques is a defining factor in the Roskamp Institute’s ability to be continuously on the cutting edge of neuroscience. These groundbreaking studies will ultimately help us to achieve our goal of discovering better treatments for those living with TBI-related disabilities,” said Dr. Crawford.