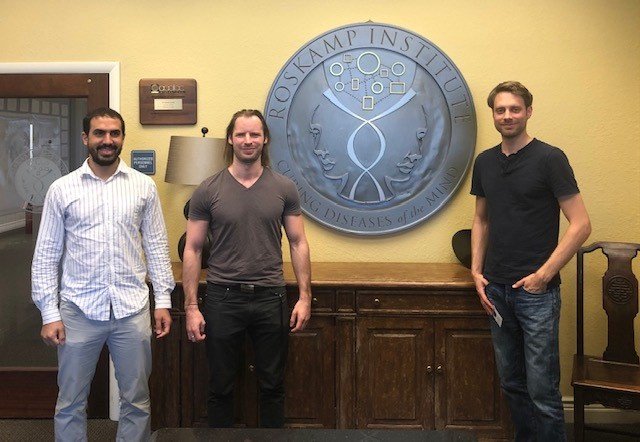 From left to right: Moustafa Algamal, Cillian Lynch, standing next to another Ph.D graduate, Jonas Schweig

The Roskamp Institute is pleased to announce that two more students have earned their doctorates through the Institute’s unique program, bringing the total number of graduates to 11 since the program’s inception.

Moustafa Algamal became the tenth student to earn his Ph.D. at Roskamp in January.

Dr. Algamal then used these models to investigate the underlying pathological mechanisms and explore new treatment strategies for these conditions.

“My overall Ph.D. journey was thrilling and enjoyable, and I will always treasure the unique memories I have from the Roskamp Institute,” Dr. Algamal said.  “Although this experience came with some challenges, the presence of encouraging colleagues and supporting supervisors have helped to overcome any difficulty.  My supervisors, Dr. Fiona Crawford and Dr. Joseph Ojo, have always supported me to become the best scientist I can be, and I have benefited tremendously from their ample experience.  I will always be grateful for their mentoring.”

Before coming to The Roskamp Institute, Dr. Algamal earned a Master’s degree in chemical biology from McMaster University in Canada. Dr. Algamal is also a licensed pharmacist in his home country of Egypt.

Dr. Algamal said his long-term goal is to be a leading scientist in the field of drug discovery for neurodegenerative and neuropsychiatric disorders. This summer, he will be starting a new job as a postdoctoral research fellow in Massachusetts General Hospital-Harvard Medical School. He said he is sad to leave the Institute, but happy to reunited with his wife who is completing her first year as resident physician in University of Massachusetts, and excited about his new research, which he says “will allow (him) to learn about controlling neuronal circuits in preclinical animal models of Alzheimer’s disease.”

The success of Dr. Algamal was quickly followed by that of another, Cillian Lynch, who became the eleventh student to earn his Ph.D. at The Roskamp Institute.

Lynch’s studies were completed under the supervision of Drs. Corbin Bachmeier and Benoit Mouzon.

“I have benefited greatly from the tutelage and insight of my colleagues and made friendships and connections to last a lifetime,” Dr. Lynch said. “I feel especially proud of mine and my fellow students’ research, as I have no doubt we have made a meaningful contribution to the body of work aimed at helping those suffering from neurodegenerative illness.”

Dr. Lynch said he will continue his career in Neuroscience research and will be commencing a Post-Doctorate research appointment at the University of Pennsylvania, Philadelphia, in July, which will enable him to pursue further cerebrovascular research including human TBI patient studies.

Dr. Crawford, President and CEO of the Institute, is also the Director of the Institute’s Ph.D. program.  She comments “It seems a very short time since we graduated our first scientists, and now we have 11 Ph.D. certificates on our wall!  The quality of our students continues to grow, and to impress all with whom they interact.

“Moustafa and Cillian have each made significant contributions with their thesis work, which I am confident will contribute to development of better treatments and diagnostics for traumatic brain injury and posttraumatic stress disorder,” Crawford said. “I will be very sad to say goodbye to them but cannot be too sad when their careers are now taking them to exciting opportunities in prestigious institutions such as Harvard and U Penn!”