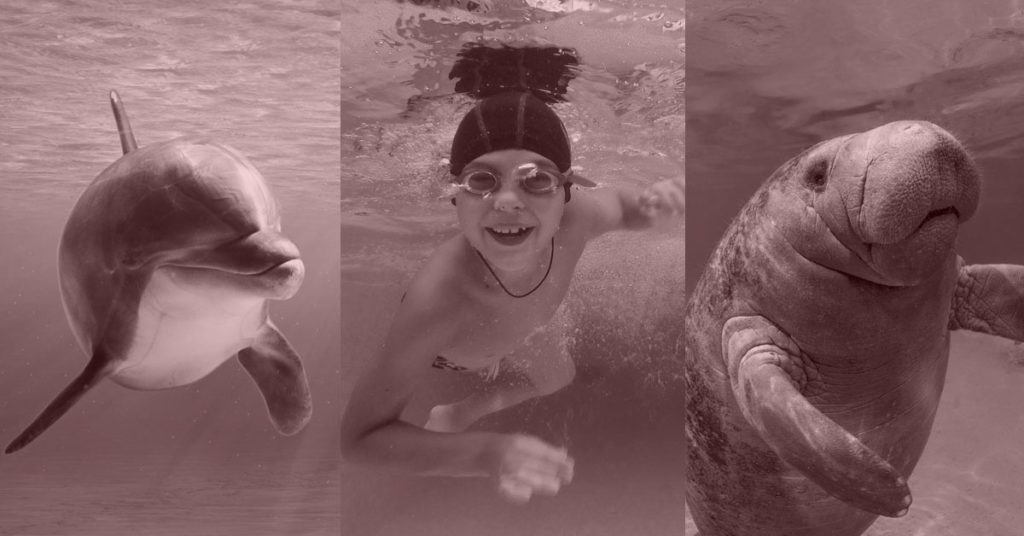 Florida Red Tide has been destroying marine life and adversely affecting coastal Floridians for decades, with little understanding of its potential health risks to those in our community.

The Roskamp Institute is currently conducting a clinical study on the potential effects of the Florida red tide neurotoxin, brevetoxin, on brain health. We are working hard to examine the neurological effects of Florida red tide and are focused on determining if exposure to brevetoxin can increase the incidence of neurological symptoms in susceptible individuals that live in Sarasota and Manatee counties. In May, Roskamp Institute scientists successfully competed for a peer-reviewed federal grant of over $400,000 from the National Institute of Environmental Health Sciences [NIEHS] to advance this project.

“Hopefully, our research will show that there is no link between the Florida red tide brevetoxin exposure and an increase of neurological disorders,” says Dr. Mike Mullan, one of the team leaders in the Florida red tide project and the Executive Director of the Roskamp Institute. “However, when you see metric tons of marine life being killed in a few weeks you realize how powerful the neurotoxin is, and knowing that some of the effects of exposure can be long-lasting in other species, it makes sense to make sure that something similar is not happening in the human population – particularly in vulnerable populations.”

Project team leader Dr Laila Abdullah added that, “One critical observation is that brevetoxin does not affect everyone equally – some people are relatively unaffected by it, whereas others get severe symptoms very easily. We are very interested to know the reason for this and so we are examining the role of the immune system and looking at differences in neurological effects between those that have severe symptoms versus those that do not”.

Most of those who have experienced the negative effects of red tide have mild to moderate upper respiratory tract (throat and nose) symptoms, and it is well known to trigger asthmatic attacks in predisposed individuals. However, previous work, including a study by Dr. Barbara Kirkpatrick, who is a key team member in the present study, recorded an excess of Emergency Room admissions for neurological complaints during the Florida red tide blooms occurring between the years 2005-2009. Exposure to other neurotoxins can result in harmful effects on the brain in mammals. Memory impairment, epilepsy, dementia, neuropathy, and/or myopathy are common manifestations of neurotoxin exposure.

The lethality of brevetoxin exposure in marine life extends beyond fish and crustaceans- even populations of large mammals such as dolphins and manatees have been adversely affected by red tide blooms in the Gulf. Marine immunologists at Mote Marine Laboratory have shown that manatees that were exposed to sublethal levels of red tide had significant decreases in lymphocyte production, and that there was a significant correlation between oxidative stressors and brevetoxin concentrations in blood samples from affected manatees1. This suggests that exposure to brevetoxin in these large mammals impacts the normal functioning of the immune system. In addition, during the severe, prolonged red tide bloom of 2017-2018 on the Gulf coast, at least 176 dolphins died as a result of brevetoxin exposure. Dolphins are considered to be a sentinel species for toxin exposures in a marine environment and have been studied as potentially analogous models for human exposure to a variety of neurotoxins.  Scientists from the Chicago Zoological Society’s Sarasota Dolphin Research Program and the Department of Ocean Engineering and Marine Sciences at the Florida Institute of Technology found that brevetoxin exposure can lead to behavioral changes in dolphin populations2. This study revealed that dolphins living in Sarasota Bay, FL had a greater rate of “chuffing,” an explosive type of inhalation, during a red tide bloom as compared to when there was no active red tide bloom. This type of behavior has been suggested to be analogous to human respiratory distress by the study’s investigators. To date, red tide-specific studies in both marine animals and humans have focused primarily on respiratory issues, with little examination of its potential neurological effects and complications both in the short- and long-term. Together, the fact that brevetoxin specifically attacks the nervous system and red tide has been shown to produce more neurological complaints in the citizens of Sarasota and Manatee counties, our studies focused on brain health will be critical to understand any potential impact of this neurotoxin in vulnerable citizens.

The Roskamp Institute’s red tide study is working to fill the gaps in our knowledge about brevetoxin and its potential significant neuroinflammatory effects in our residents, given that they are usually annually exposed to red tide in this part of the Florida Gulf Coast. Investigating whether brevetoxin accumulates in the brain and if it leads to or exacerbates chronic neurological illness is a priority for the Roskamp Institute, as it directly relates to the health of our local communities. In addition, based on the manatee studies above, we are also interested in understanding the potential relationship between brevetoxin exposure and immune dysfunction and whether that relates to neurological symptoms. This study is consistent with the overall mission of the Roskamp Institute, which is to understand and mitigate the biological effects of and environmental factors which can impact the human brain.

The study calls for the recruitment of 400 volunteers in Sarasota and Manatee counties and requires 3 assessments where blood and urine samples are taken to measure brevetoxin and antibody levels. Volunteers will be seen during periods when no Florida red tide blooms are being observed and also during periods when they are. Comparing the levels of brevetoxin and antibodies with the levels of neurological complaints will shed light on whether Florida red tide brevetoxinexposure can trigger neurological conditions and whether immune responses are likely protective or make symptoms worse. As with other diseases studied at the Roskamp Institute, scientists and clinicians there are always looking for new ways to understand and treat neurological disorders.

If you want to learn more about this and other clinical research studies being conducted at the Roskamp Institute, please call Megan Parks at (941) 256-8018 ext. 3008. 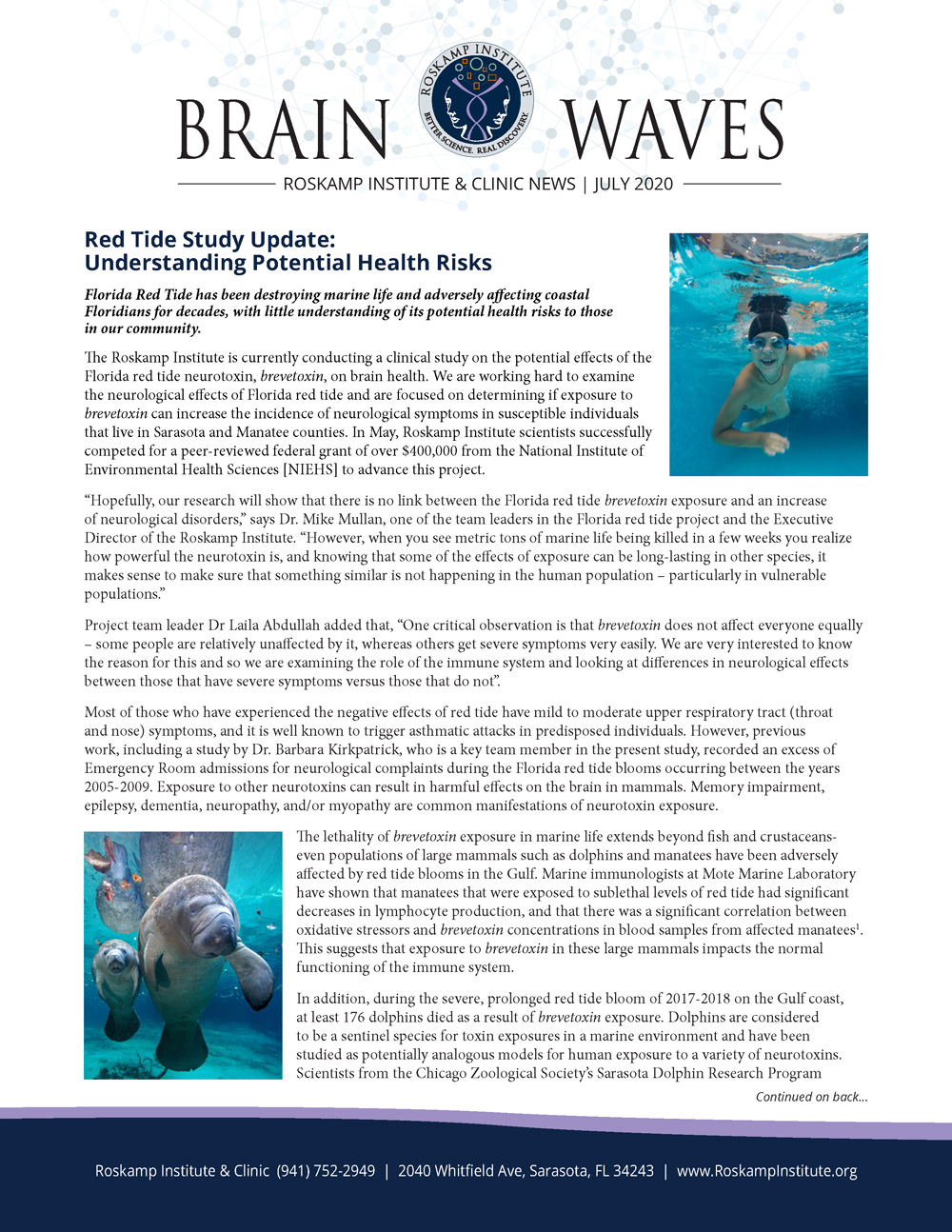