Roskamp Institute scientists, in collaboration with the Gulf of Mexico Coastal Ocean and Observing System (GCOOS), have been conducting a clinical research study to understand the potential impact of red tide blooms on brain health. The team recently published findings from their study in the peer-reviewed journal Harmful Algae. The study provides new evidence that red tide exposure can affect human brain health. This study suggests, for the first time, that certain individuals are susceptible to the neurological effects of airborne exposure from red tide blooms. 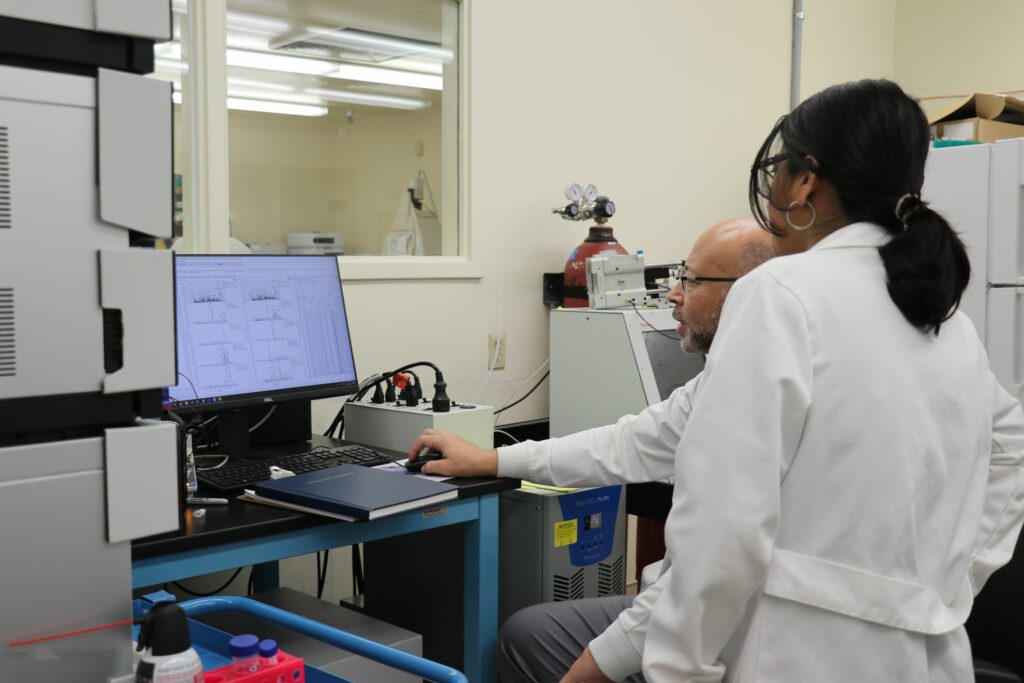 According to the study, individuals with a prior medical history of migraine or chronic fatigue syndrome (extreme fatigue that worsens with physical and/or mental activity) are more likely to have symptoms that have previously only been associated with eating seafood contaminated with red tide toxins. However, participants in this study had only been exposed to red tide toxins in the air.

Prior to the study it was well-known that eating red tide toxin-contaminated shellfish produces an illness called neurotoxic shellfish poisoning (NSP) which causes nausea, vomiting, diarrhea, numbness and tingling, dizziness, headache, and a reversal of hot and cold sensations. Even though volunteers had not eaten contaminated shellfish, some reported symptoms similar to NSP. Among individuals who experienced NSP-like symptoms, more tended to have a prior medical history of migraine or chronic fatigue syndrome.

“During previous studies looking at how red tide toxins affected lung function, study participants sometimes reported headaches, and we thought it was important to investigate this further,” said Dr. Laila Abdullah, Research Scientist at the Roskamp Institute, and lead author of the paper “Exposure-response relationship between K. brevis blooms and reporting of upper respiratory and neurotoxin-associated symptoms.”

“Building on previous findings, we found that migraine sufferers reported headaches during red tide blooms. However, we did not expect that people would report NSP-like symptoms,” she said. “Our study also indicates that repeated airborne exposures in otherwise healthy people can also make them more sensitive to red tide.”

One key question about red tide impacts on human health is why individuals respond so differently, said Roskamp Institute Executive Director Dr. Michael Mullan, physician and research scientist. “Different people respond to the toxins in different ways – from not being affected at all to experiencing a range of severe symptoms. We don’t understand why that is the case nor do we know the dose levels of toxins that are needed to cause neurological symptoms. There is still much to understand about this toxin and the levels of the threat it poses to human brain health.”

Study co-author Dr. Barbara Kirkpatrick, GCOOS Senior Advisor, was one of the lead researchers in the early studies of red tide and human health, including a study published in 2007 that found people with chronic lung diseases were impacted by airborne red tide toxins. She said this research is a continuation in gaining a fuller picture of the human health impacts of red tide. “Our work on the human-health impacts of red tide led to our development of the Red Tide Respiratory Forecast [redtideforecast.com], which helps people know which beaches could have red tide impacts throughout the day and lets them know when the best time to visit a particular beach will be. These latest findings indicate that there is much more for us to discover about how humans are impacted by red tide, and we’re hoping to continue building upon this work in future studies.”

Roskamp Institute CEO Fiona Crawford said that as a nonprofit organization dedicated to understanding the brain and finding treatments for brain disorders, the Institute is committed to continuing red tide neurological research. “More than three-fourths of Floridians live along our coasts, and more new residents are moving here every day. Harmful algal blooms like Florida’s red tide are predicted to become more frequent and longer lasting as our climate undergoes changes, and it is important to understand how our brains are impacted by red tides and what we can do to mitigate any risks they may pose.”

This study was funded by the National Institute of Environmental Health Sciences (NIEHS).

If you want to learn more about this and other clinical research studies being conducted at the Roskamp Institute, please call Grace Bartenfelder at (941) 256-8019 ext. 3046.